Homing attacks are proceeding acceptably. Here is the first ship from Sector 2 in action: 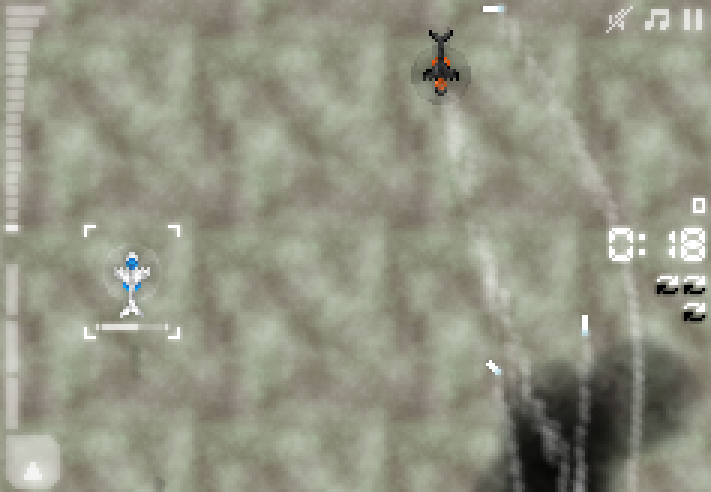 That’s the new attack helicopter. Its secondary attack is deploying those homing missiles. The missiles can be shot down, but they’re fast! It’s perhaps easier just to dodge them until they run out of fuel and tumble off screen.

It’s a neat weapon. I am looking forward to making some kind of boss which periodically unleashes a vast missile Armageddon.

The other change visible in this screenshot is that I’m conceptually renaming “lives” as “switches”, with that little cycling icon. This should go some way to making the game more intuitive, especially when I redo the tutorial (again) to add an explanatory section on death and side-switching before you play.

On the subject of tweaks to the core mechanics: I’m going to replace the “heat” bar to “energy” which charges up when you’re not firing, much like R-Type. This won’t make much difference to how the game plays. You’ll still have to stop firing for a second or so to have the access to the powerful bursts of weapon fire necessary to take out opponents rapidly. However, it means that when you’re not firing, the bar will be filling up instead of emptying down. Again, this is an intuitiveness fix: not-firing will obviously become a planned move where you’re building up some asset you can use later, rather than a tedious and necessary return to a base state.

I’m also going to add a second “energy” bar for some ships, to make better use of the dual-weapon system. One example is the helicopter! Its homing missiles are quite cool but a bit cheap, so I want to make them recharge slowly (every 5 seconds or so) separately from the main cannons. That means you’ll be incentivised to play as normal even though you have a gun that can shoot anything from anywhere.

In short, the game’s maturing now. I’m storming ahead with new content (ship types and backgrounds) to fill the game out, now the core mechanics are solid enough. Meanwhile I’m iterating on the core systems, refining them with the odd tweak so they’re readier for release and culling a few things that are proving irrelevant.

That’s probably as good a place as any to down tools on the project and polish up Vigilance for a week. Ludum Dare’s judging results will come in  on the 24th and I have a feeling my game’s going to do well, so it’s time to fix it up for general release and take it on the Flash game licensing circuit! If I find it a good home, it should provide my first indie gamedev income. I’m excited 😀