I’m currently polybushing my car, which involves removing all the soft bits of rubber and replacing them with polyurethane. To do this I need to disassemble my car’s suspension and entire rear axle, then put it all back together with a replacement subframe and brand new bushes by Saturday. I’m currently repainting the new (second hand) subframe, having stripped all the rust off it earlier, and it’s currently sitting in the kitchen with a coat of primer curing. I’ll slap on another coat of primer this evening and a topcoat tomorrow, then start really dismantling stuff and swapping parts over on Thursday/Friday.

Yep. This is our kitchen this week: 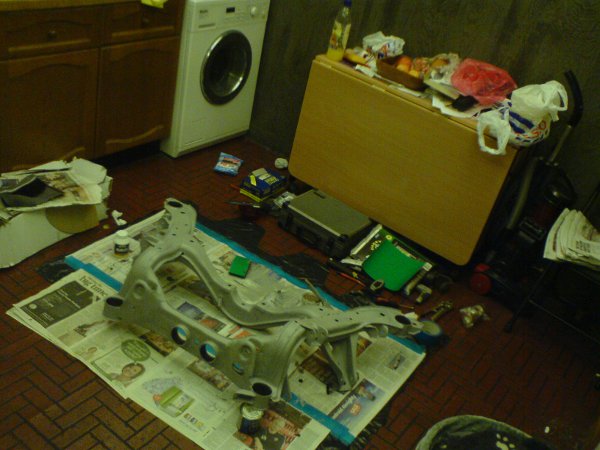 Needless to say that’s going to take up a bunch of my time over the next few days – and Elizabeth has the patience of a saint. 😀

In the gaps between Urgent Car Maintenance Task, I’ll be working on Fight Back. There’s a similar level of deconstruction and reassembly involved here! I’m totally overhauling the game’s codebase to support the following:

What does all that mean in English?

Now, I’m not guaranteeing I’ll add multiplayer or make it 3D or put out an iPhone version or anything. I just want to keep these options available. All this refactoring will give me a much more solid foundation to press onwards with.

Wish me luck. I’ll try and get enough done that I have screenshots with some of the new graphics by Wednesday. 🙂