I’ve got most of the essentials figured out with Fight Back now, so I’m finally getting to move whole new systems across. Stuff like ship physics, weapons and AI. This is my current sandbox: 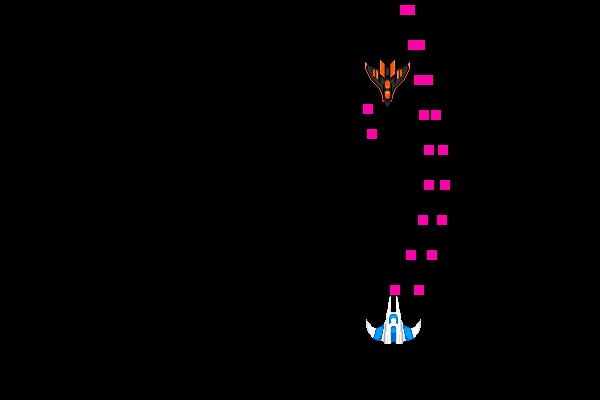 The white ship’s a player ship, the black ship’s an AI. The pink squares, well, they’ll become bullets in good time. About when I sort the background out, in fact. 😀 As for why they’re pink – as a general principle when you’re doing something placeholder, the more obviously wrong it looks, the better! Hot pink usually serves that purpose perfectly, though maybe pink bullets in a shmup aren’t that strange?

This rebuild of the game was starting to feel like I was writing the whole thing from scratch, but it was taking four times as long. I’m finding it a massive relief to be pulling huge chunks of code across now and suddenly having all this major functionality springing back to life. My motivation for this project’s coming back in force, which is a good thing. There’s still quite a way to go before I get to play with Stage3D rendering, 3D backgrounds, shader effects and so on, let alone some design changes that’ll make the game way more intuitive and fun! Here’s a sample of stuff that needs doing first, off the top of my head:

Once all that’s done, the game will be pretty much up to where it was – but much more robust, and much prettier – and I can start adding fun new stuff. I just need the energy to keep plugging away at that todo list, but I think I have that now. 😀