Just a quick update today, since it’s been a while and I FEEL BAD ABOUT THAT 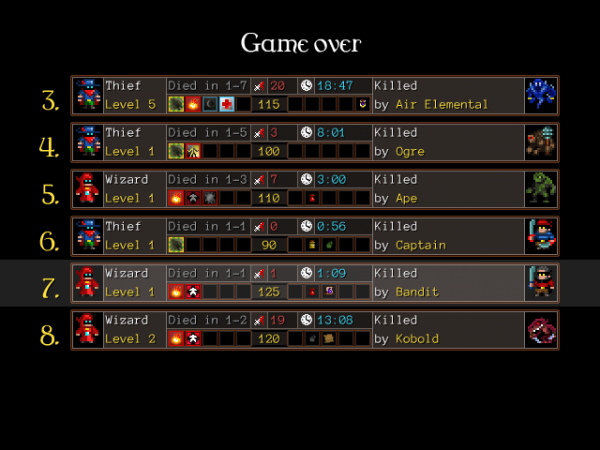 That’s a super early snapshot of CQ2’s “high score” system. You’ll notice the total absence of a score. Right? Truth is, though it’s a system set up to reward skilful play, it’s first and foremost set up to do what I reckon people really want from roguelikes – a permanent record of the awesome or stupid stuff they did. It comes with a loose and vaguely intuitive ranking, but it’s mostly there to provide history. History like “how often you died carrying a healing potion”. 😀

It’s calculating a score behind the scenes for the purposes of ranking, even if it doesn’t show it. The most important thing is how far you got. Secondary to that is how quickly you got there (in game time, not real time; it’s turn based!). Finally, there are small bonuses for gold and kill count. The first thing you want to do to rank well is to clear the game; after that you want to work on clearing it faster and faster… exploring less… running through areas… giving up items and XP just to push through quicker.

But however much you choose to give up for the sake of speed, you still have to kill the end boss. It’s a balancing act.

Anyway, I just wanted to put up this early preview because I haven’t posted in ages. I’ll probably show it off again once it’s pretty. 🙂