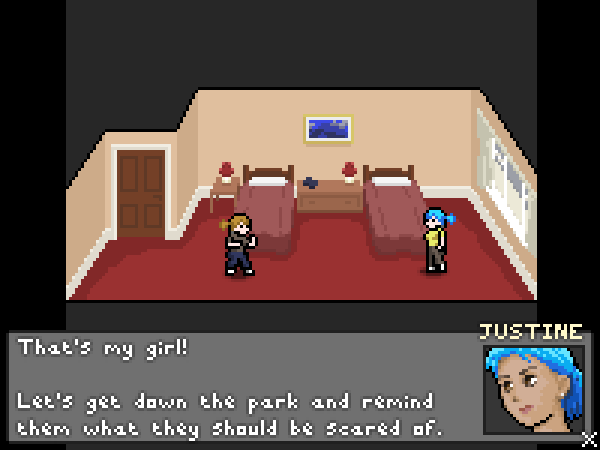 Turned out these distracted too much from the action on screen, and they’re a bit naff and JRPG. It was fun learning to draw them though.

Arcade mode currently looks quite similar to night-time combat. There are some rule differences… namely, there’s a time limit, and you hit people until money comes out. I’m not sure what the subtext is there.

Speaking of combat, the AI behaves much more sensibly now with a variety of range and behaviour tweaks – they won’t chase you half a mile any more, they’re too lazy.

I’ve also started giving the player health back mid level. The longer stages were brutally hard – you ended up carefully watching your health bar, trying to mete out damage efficiently before you wiped out. To fix this, I reduced the amount of health the player has and now give you some back when you scare someone off screen or knock them out. The feel’s now much more immediate, since you can die more easily early on and you’re not quite so doomed later. Definite plus.

So that’s what I’ve been up to!

I know I said I’d stop on Sunday, but eh; an arcade mode was a good suggestion, and feature creep can be worth it 😀 The game’s fundamentally done now, apart from a few loose ends that need tidying (and Arcade Mode’s going to get its own quick unique backdrop and soundtrack).

It’s now in beta testing for difficulty/usability tweaks, which may run on a few days. I’ll try to avoid starting whole days’ worth of new work on the basis of testing; it should just be a few hours here and there until it’s done now.