Here is my character in Skyrim. 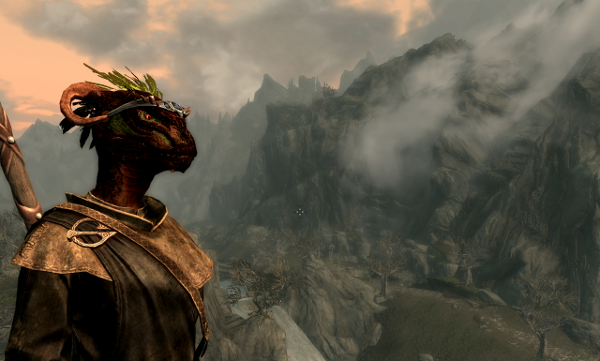 I AM A PRETTY PRINCESS

Really, she’s my third character. My first was a noble archer/swordswoman who’d help out anyone in trouble, leave people alone if they begged for mercy, and at least thought twice about looting burial urns for money.

One high point of her early career was manipulating a dragon into fighting a giant. The giant won and turned on her, just as a Dark Brotherhood assassin leapt from the bushes. She managed to dispatch them both. Another high point was getting drunk in a tavern and waking up on the other side of the country. But anyway – she was too upstanding to join the Thieves’ Guild or Dark Brotherhood, not magey enough to really join the Mage College, and frankly that only leaves the rebellion storyline and the main one. They’re a bit dull! Too many speeches.

So she had to die.

My second character was a thief who refused to have anything to do with violence and simply ran away at the first sign of trouble. Having avoided the nearby city on the grounds of it probably being a set-up it took him three hours of sneaking along roads, running away from wolves and robbing villages blind to reach his first city with a travel cart. He likes fancy clothes, easy money and not being shouted at by men with swords. He tried doing a quest once since it sounded pretty safe. It ended with him running through a bunch of surprised pirates hoping they wouldn’t block the doorways and then dodging their arrows as he ran for the hills. He didn’t get paid. He still hasn’t figured out where he can fence any of the stuff he’s nicked, or in fact what money is good for if you stay out of fights.

The third character, the one above, I made purely to do the Mage College storyline since it seemed interesting. Firstly, the Mage College quests are awesome. Secondly, magic is awesome. I spent something like twenty hours with my first character hitting stuff with swords, and the moment I fired up this new character focusing entirely on Destruction magic, my immediate thoughts were OH MY GOD THIS IS AWESOME I WILL SET EVERYTHING ON FIRE FOREVER.

Here are some of the bugs I’ve found in Skyrim: 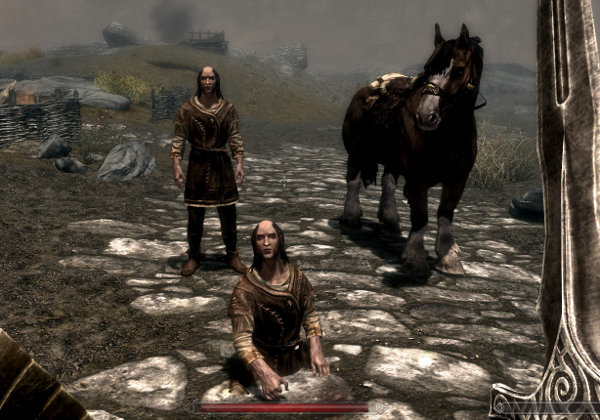 These two men? They are the same man. If you talk to one of them, they both lip sync together. 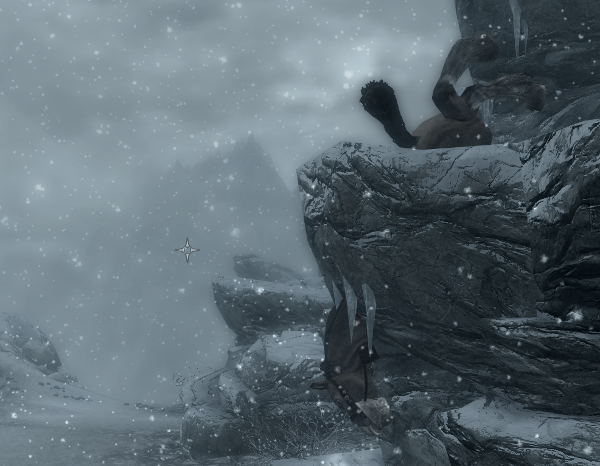 I was walking along a mountain path for the first time and I found this. Dead horse, clipping through a rock. Mad. 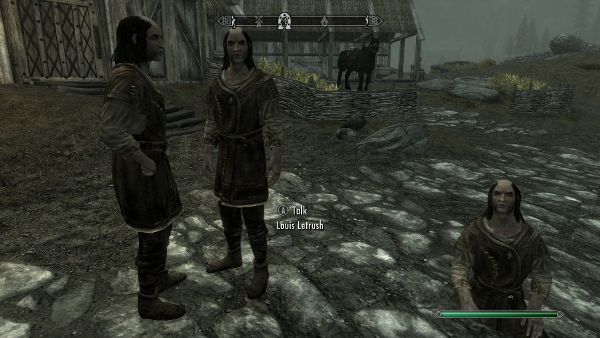 When I visited again, there were three of them.

Here are some other bugs I’ve hit but couldn’t capture in screenshots:

This game’s mental. It crashes. All of the NPCs are mental, repeat themselves, talk over each other, and forget stuff that just happened. Things happen for no apparent reason, and then don’t if you reload. The difficulty spikes are taller and more intractable than the mountains, which at least have paths up the side. The interface is hell for keyboard and mouse, so I’ve been playing with a 360 pad.

And goddamn if it isn’t one of the best games this year. 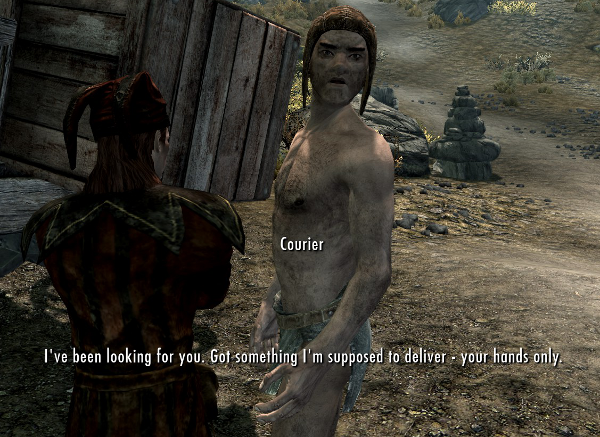