Between one thing and another (okay, mostly Diablo III) I haven’t had much time for blog-posting over the past two weeks. Even so, development’s been going on at full pace.

The single biggest thing I’ve done is add a half dozen new monsters and totally overhaul monster placement and the difficulty ramp. Essentially I’ve made the monster difficulty and the player’s strength climb about half as fast over the course of the game, meaning that for any given monster there’s a much wider period in the game during which it represents a credible threat. That lets me mix up your opposition a bit so encounters are more diverse. 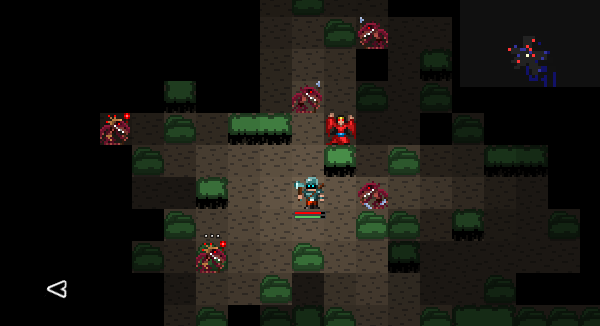 One of the new monster classes is the mage. Now, these fellas tend to hang out at a distance causing trouble. The one there is a Fire Mage who’s happiest chucking fireballs at you. There are a few others; the Conjurer summons random elementals, and the Priest can heal and buff other enemies around you.

In my last game, totally at random, I met two Priests in the forest. There were a few enemies around, but because of the trouble the priests can cause, I went after them first. I knocked one of them down to hardly any health. He ran away, so I chased him out into the open… and then the other priest healed him.

Then they both buffed enemies around me. And then I died.

The other major improvement lately is the stealth system. It’s a bit clearer what’s going on. Here are two enemies who haven’t noticed me yet: 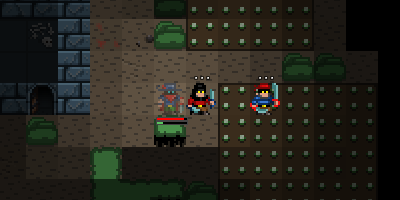 …and here’s one who just did:

I’m gradually trimming down the todo list; CQ2 is perhaps a few months away from a state where I reckon we could do a decent closed beta. As part of heading towards that goal I think I’ll start next week by laying in a placeholder version of the game menu and revising the in-game UI (again!). Here goes…