There’s a monster in Dungeon Keeper that never appears in the summon lists. It’s a monster that’s been around a while and I think I’ve finally figured out what it means to me and how I want to guard against it. 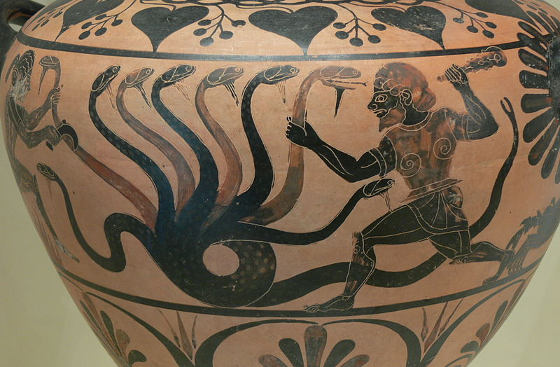 As the legend goes, Hercules was set many tasks to atone for his sins. The second was to slay the Lernean hydra, a nine-headed creature whose breath was lethal poison and bile so putrescent that wounds it touched would never heal.

Worst of all, cutting off any of this monster’s heads would cause two more to grow. It was immortal.

Dungeon Keeper isn’t unique. There are many games like it. What unites them is an insistence on inconvenience. Even the slightest advancements rapidly stretch out to hours or days of constant attention, grind and busywork. Raid every fifteen minutes! Slap your imps every half an hour! Harvest rocks and gold six times a day! Optimal play means doing nothing, as often as possible, for the chance to occasionally make an interesting decision.

Or, for just fifty cents, how about you skip this wait timer and get started on the next one?

That’s our monster’s attack. It’s The Suck. You’re drowning in quicksand and Adam Smith’s invisible hand is there, offering to pull you up a bit… for a price.

Up a few inches, anyway. Never all the way out. 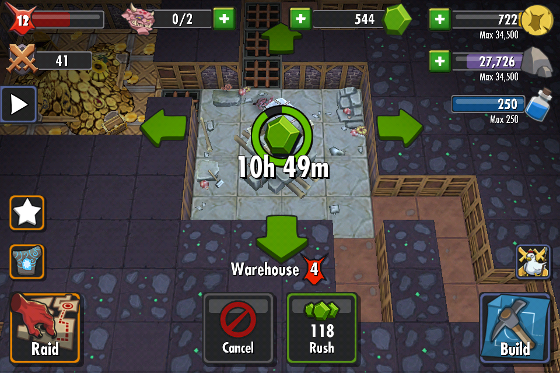 Dungeon Keeper’s “boosts” alone, which amongst other things allow you to cheat your way past the metagame of hidden trap placement, would cost fifty to eighty dollars a month to maintain. Besides those boosts, every action in Dungeon Keeper has its own distinct cost. Often actions carry two price tags: a resource cost and a time cost, both of which can be paid with cash.

These games simulate uncomfortable poverty within an artificial economy in which your labour is worthless. That is the state of mind their owners hope you will experience. This state of inadequacy helps you see the constant bombardment of opportunities to spend money as a really good idea.

Take them up on one of these opportunities and they will, briefly, grant you the feckless malaise of the idle rich, simply choosing how best to invest your payment. Of course, with the advantages conferred by raw capital, your labour is now worth even less. Any productive action you can perform, which would itself cost money, can be supplanted by simply purchasing the end product. A game you’re prevented from playing becomes one you don’t need to.

Your capabilities within the game never reach balance. All customers must either be suffering, feeling sales pressure, or burning out in an all-too-brief high. This leaves no way out of The Suck. Your money will never be enough. Boosts expire and must be renewed. Upgrades paid in full instantly unlock newer, hungrier upgrades.

Reviewing Dungeon Keeper’s economy, I believe playing these early stages without waiting for timers would cost you twenty or thirty dollars an hour. I have no idea how much it would cost to powerlevel to the endgame, if it’s even possible, or how high the timers go. I can only see them getting longer. The full costs of higher level structures and units are, of course, hidden until you get there.

How much do you value your time?

Deadlocked against his own hydra, Hercules ultimately called on his nephew Iolaus for assistance. The younger lad lept in with a firebrand to cauterise each neck of the beast as Hercules sliced through, preventing regrowth. Finally Hercules sliced off the very last head and buried it beneath a heavy rock, ending its rampages forever.

Hercules’ taskmaster, King Eurystheus, was not impressed. By involving Iolaus, Hercules had used outside help to achieve his task. Eurystheus declared his accomplishment unlawful. He’d drawn on resources outside the frame of the challenge. His triumph didn’t count.

Dungeon Keeper outlaws the firebrand from the very start. The outside assistance you can buy grants you only a sword, to cut back heads that forever regrow. The Suck Hydra will never die. 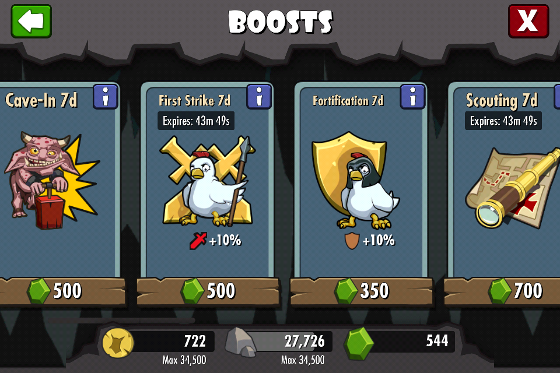 I believe there is such a thing as fun, honest F2P design. I believe we need the conceptual tools to better recognise unacceptable strategies common to F2P games, to find a clear line between design we enjoy and design we deride.

For me, the Suck Hydra is that dividing line. It’s wait timers on every action. It’s temporary boosts. It’s items for rent. It’s an aggressive approach to selling which puts a price on everything but hoards its treasures, keeping one claw on everything you buy to pull it back. Nothing enduring is for sale, only skips ahead on economic or XP-based treadmills.

It’s the belief that those who spend money must never be deprived of the opportunity, or incentive, to spend again.

This version of Dungeon Keeper conceals a remarkably capable game. It’s simplified and modal, sure; that’s the price of converting any PC classic to smartphone touchscreens. It’s a lighter game but still one which suggests tactical depth in dungeon layout and trap management. The spells available, the hard creature counters and the different AIs used by different species show the potential for tough, multiple-stage assaults on other players’ defences, allocating your limited resources in staged sequences to manipulate the system.

I’ve enjoyed analysing the hints of this system and considering how to game it… but the Suck Hydra rules these tunnels now. No mere player can usurp an immortal.