I’ve gone over the in-game UI for Cardinal Quest II, but there are plenty of other interface changes going in. My current focus is the Character Screen, which was a straightforward list of attributes before but is now gaining a ‘talent tree’ system for levelling up and customising your chosen class.

I’ll spare you the old version and the mockup. Here’s what came out of the process: 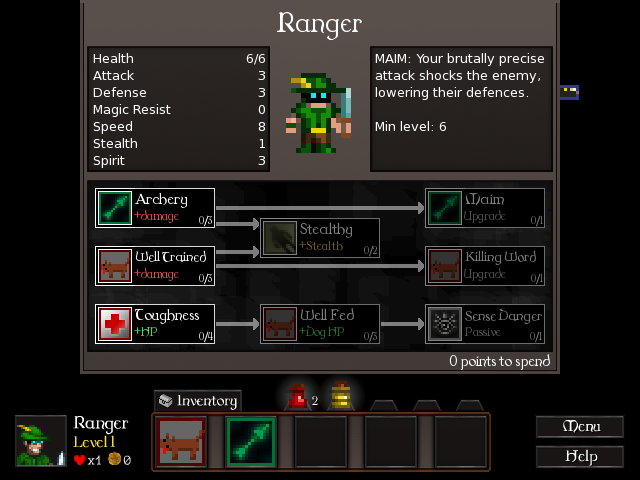 Every class’s talent tree will be slightly different, but they’ll all have 7-9 talents in three rows. Those talents will be a mix of repeatable stat boosts (more hit points, more damage) and one-off upgrades or new skills. As examples of the one-offs: “Maim” in the Ranger’s talent tree above is an upgrade to your Bow And Arrow attack skill, reducing the stats of the injured enemy temporarily so you can really lay into them. “Sense Danger”, on the other hand, allows you to permanently see the presence of enemies on the other sides of doors.

Occasionally you’ll find new class-unique skills in talent trees. The Wizard will be able to buy one of two new attack spells.

The way levelling up worked in Cardinal Quest I was, every time you gained a level, you simply gained more max HP. This time, increased max HP is a choice! Every single class will have that Toughness talent available and will be able to increase their HP in big chunks. However, you’ll have to choose between those HP increases and serious boosts to your abilities elsewhere. Would you rather play it safe… or go for the quick kills?

Given you’ll only have seven or eight talent points through an entire run to spend across 15-20 points worth of skills, there’ll be a few subtly different ways to play each class – even ignoring the effects of the spells you might find. This’ll add a fair bit more strategic interest to each run.

It adds plenty of opportunities for really cool stuff at higher levels, too. My favourite talent so far is a high-level one for the Pugilist which makes him kill enemies in an exceptionally brutal way – meaning lower level enemies flee in terror. 😀