Coming up with fun, distinct new classes means drawing inspiration from a bunch of different places. Class number 5 in Cardinal Quest’s roster is going to be the Pugilist, an unarmed badass of a brawler who’s happiest out in the open. That’s not normal for roguelikes, so he has some unusual skills.

The main one is Sweep, a move which stuns everyone around him for several turns and gives him a temporary +1 attack, +1 defense buff for each person he hits with the move. If he’s in the middle of a crowd, he stuns all of them and gets a +4, +4 buff. 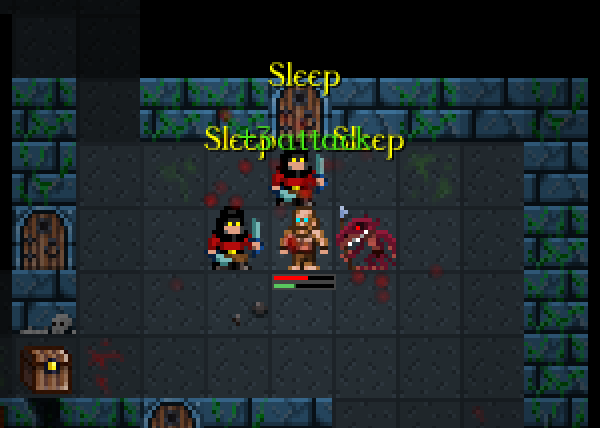 The other is Uppercut, a damaging move which knocks an enemy back a space and follows up. 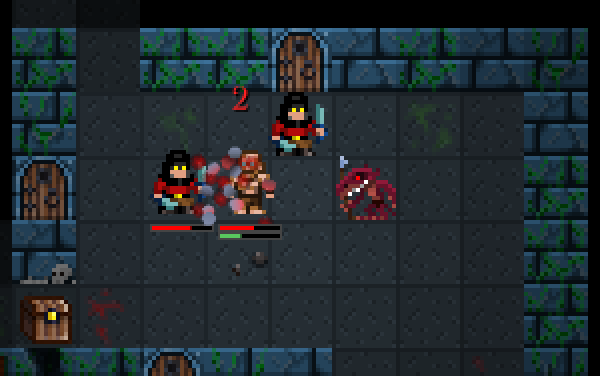 Both of these moves are loosely inspired by Disgaea, of all things. It’s a turn-based tactical RPG. If you’ve played it, you’ll know that moving your enemies around with various skills is just as important as moving your own characters; it has loads of skills like this!

Uppercut draws from somewhere else as well. The Diablo II Assassin class has a combo system, where hits build up a combo charge and then another skill unleashes that combo as damage. Uppercut, uniquely among CQ’s skills, gets charged up by damaging enemies with your fists. Hit them a few times, then you’ve powered it up and you can UNLEASH THE FURY.

This leads to some pretty cool synergy. You can Uppercut an enemy, knocking them back and pushing yourself into the middle of a crowd. Then you can Sweep to stun them and get a huge buff, hit them several times for free while they’re stunned, and by the time they wake up Uppercut will be charged again from those free hits so you can punch out your escape.

The mechanics of roguelikes guarantee that you’ll benefit from using chokepoints, but this guy has a powerful incentive to fight away from them occasionally. It’s fun mixing it up and encouraging people out into these dangerous situations. 😀

2 Comments on “THE POWER TO MOVE YOU”