On Saturday evening I was browsing the TIGSource forums and came across this thread about making a game of Snake in ActionScript and sharing the source. It got me thinking, and I ended up spending the weekend making a Snake variant called Corpse Snake where you grow as normal and then score points by mutilating yourself. Go play it! 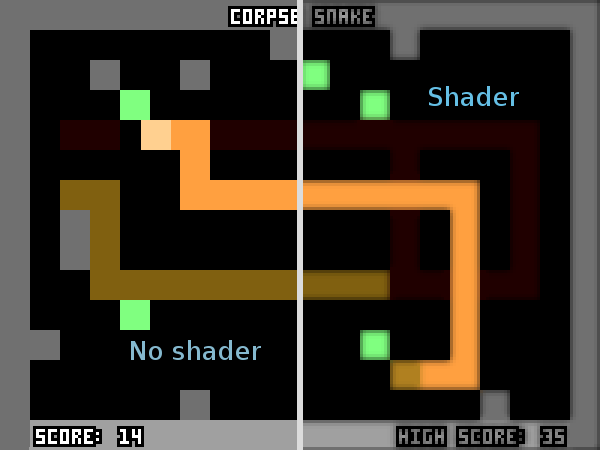 One thing I’ve noticed a lot of Snake clones do is that they make the play field really large and empty, so there’s very little pressure on the player to respond. I prefer to keep the pressure on – so Corpse Snake runs on a pretty tight 18×13 play field, it starts off with a few squares filled in around the edges, it has five apples to go for at any given time… and the play field gets smaller as you go. I hate to bang on about this, but it’s one of those situations where the size of the screen is really important.

I finally started playing with Pixel Bender on Sunday, which is basically a way of using GPU shaders in Flash. You can now look forward to every single game I make having shaders in. ALL OF THEM. 😀 I’ve been meaning to get into shader programming for a while: it’s basically how to make pretty things happen just with programming, which suits me fine. Layering Pixel Bender effects over the top of 2D games isn’t quite as fun as shader programming in 3D, but it’ll do for now.

Anyway – if you want to play around with Corpse Snake yourself, the source code’s at the bottom of the game’s page. You’ll just need FlashDevelop, HaXe and Sam HaXe. You’ll need the Pixel Bender toolkit as well if you want to muck about with the shader.