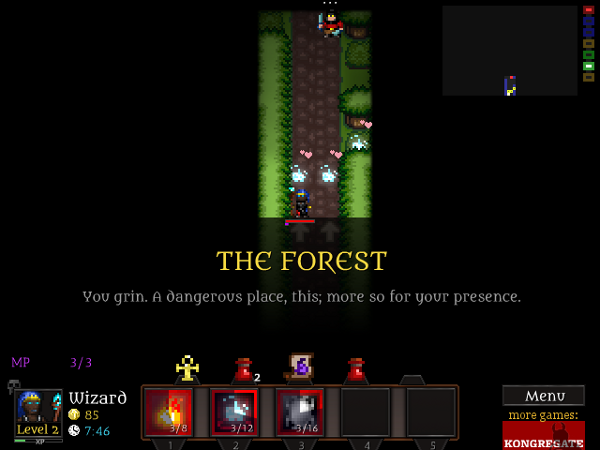 Yes, I only have 3/3 mana in that shot. That’s due to how “Classicist” handles Form Wisp! Form Wisp normally uses XP to recharge. In “Classicist”, mana used casting these XP spells is completely gone (reducing your maximum mana) until you recover it by gaining XP.

Windrunners now have +1 speed. I wasn’t originally sure how useful these would be. It felt like something that might easily be abused, so I played it safe and kept them a little underpowered. This buff should help that, plus having a buff means they’ll scale up in The Tower.

Restless Blade now gives +3 attack instead of +2 speed. Its damage is now 1-3. With the Thief’s new talents for boosting damage, this legendary Stealth weapon’s near-guaranteed stealth kills were way too good. I also wanted this to be useful for more classes than just the Thief, so I’ve shifted it away from raw damage and speed (which benefits stealth attacks and kiting) to an excellent Attack buff, which benefits regular fighting. This should still be a great Thief weapon and I’m hoping it’ll feel stronger now for many other classes.

Polymorphed creatures now have half their original form’s HP and half their target form’s HP. Polymorph has long been a way to handle the bigger creatures in the game; I don’t want to change that. However, now that I’m introducing more ally polymorphing with Hellhound, the chance of something tough polymorphing down to just 1 or 2 HP was too big a swing. I’m hoping that Polymorph’s extreme outcomes will be more fun now that their durability, at least, is a little balanced.

Tomes now only give Wizards their extra buff half of the time. This was originally just a cute bonus I added to Tomes. Wizards are book smart, right? So while other classes normally got one stat boost from Tomes, Wizards got two! Unfortunately I think repeated Tomes on the Tower ended up having too much of an effect on Wizards, so I’m pulling this in a little.

Between all that, the class changes and some other interface changes I haven’t covered, the sheer amount of new stuff in this patch is causing all sorts of trouble. I’m going to be fixing bugs for a few days now, at least, and then I’ll have to write probably the longest patch notes I’ve ever done… 🙂

I’ll aim to get the Flash version updated by the middle of next week. (The iOS and Android versions will be updated a few weeks later as usual once they’ve been approved.) Until then!