Back in the early 20th century, at Western Electric’s “Hawthorne Works” factory near Chicago, management decided to run a long term study on factors that might affect productivity. They took a bunch of people and had them work in a separate room for five years, assembling telephone relays, trying out various changes to their hours and working environment to see what worked best.

This is the Hawthorne Effect. Changes to someone’s environment tend to increase productivity, either because people develop better habits as they’re adapting or because they’re aware that these changes involve their performance being monitored more carefully. Those increases drop off over time, but they’re real.

In short: if you want to get more stuff done, routinely disrupting and improving your process isn’t going to hurt. You’ll likely get a temporary boost no matter what, and if it doesn’t stick you can always go back to what worked before, right? 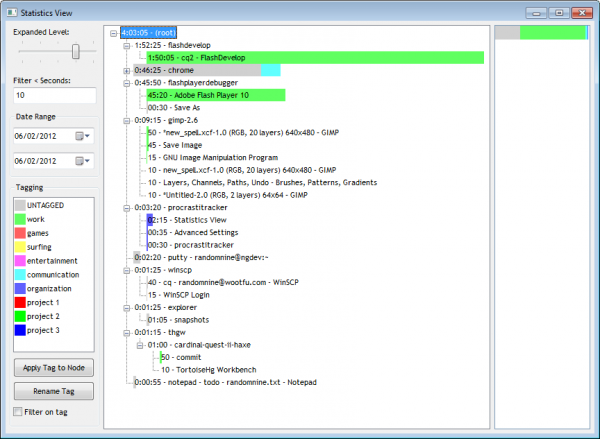 So far it’s definitely helping me keep focused when it’s running, but I’ve learned something else: I don’t really get distracted while I’m mainly working. Sure, I spent about 20% of my tracked time up there browsing, but that’s a relatively small percentage. Also, when I was starting to lose focus, it was pretty easy to stay on track.

Where I go wrong is that I spend about an hour at a time working, then – and this is when I was switching off the tracker – slack off for a solid chunk of time before starting up again. I’m probably spending about 50% of my work time in between bursts like this.

I’m going to try and use Procrastitracker to fix this habit. So far I’ve stayed focused pretty well while it’s running. If I can keep that up, I can gradually start running it more and more of the time, on a daily schedule; eventually I’ll be able to just start it up when I want to work and my brain should damn well listen. 🙂

Fingers crossed, anyway. If this doesn’t work, plan B is switching off internet access for most of the working day. Work around that, brain!

Yesterday I tried to get some stuff done and I just couldn’t. Work was going slowly, I was feeling really stressed – I’ve been feeling gradually more stressed about work for the past month, to be honest, but it finally got to the point of making it hard to think clearly about the whole thing.

What’s really been getting to me is, I’m in the middle of this long period – about two months – where I’m changing lots of core stuff about Cardinal Quest and I’m not totally sure if it’ll all fit together and work well. Everything feels good in isolation, but I won’t know if it’s actually good until all this rough work-in-progress stuff starts to resolve into something shaped like a coherent game again.

Now rationally, I do believe it’ll be good and solid. Emotionally, I’ve been worrying about it and second guessing my own judgement. I’ve never actually designed a roguelike/RPG before, so hey – what if I’m making poor judgement calls and I don’t even know it? It’d mean the work I was doing would be a waste of time. Trying to get stuff done when you’re feeling it might not be worth it isn’t much fun!

Not having much confidence in the game and feeling unhappy about it was making working on the game pretty stressful. My first response was to try and power through by spending more time thinking about and working on it, but that just amplified the stress.

What I needed to do is twofold. Firstly, I needed to get a solid idea of where the game’s going to end up and restore my confidence in it. Secondly, I needed to create some space in my life insulated from work, so even if work was getting stressful it wouldn’t drive me completely crazy within a couple weeks.

So I shut the PC off mid yesterday afternoon and took a break. 😀

I’m already feeling much better and I’ll probably get back to work on Monday or over the weekend. I won’t be rushing it, though. More than anything this has shown me that I need to pace myself when things get a bit rough. Starting next week I’m going to try and get back into working days and taking evenings off instead of it all blurring together. I think that’ll help a lot. A month or so of taking it easy and methodically knocking through to-do list items and it’ll be properly ready for playtesting. From there on out, constant corrective feedback should make development much easier, emotionally speaking.

To anyone else going through a rough patch mid-project, lots of hugs. We’ll get through it 🙂

A year ago, I’d just quit a safe job as a games programmer to do my own thing for a bit. I had savings to cover a year’s living expenses, and no idea how easy making a living at this would be. Now feels like a good time to review how that year went!

Back when I quit Frontier, in November 2010… I’ll be honest, I was really scared about whether I’d make any money this year. I was worried I wouldn’t be able to make games people enjoyed. I honestly thought I’d be looking for a job around now.

END_OF_DOCUMENT_TOKEN_TO_BE_REPLACED

Yup, Flash game sponsorship for CQ. That’s been my last two weeks. It’s messy work, but it needs to be done. 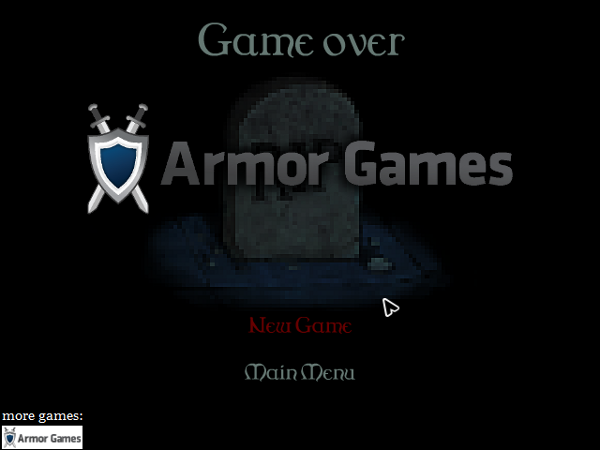 Yup – you can now play Cardinal Quest over on Armor Games if you want to. They gave us money for that, so that’s nice. 😀

That one wasn’t too bad, but the second sponsorship I’ve been working on this week has had me – surprise – mucking about in Sam HaXe again to get it working right. I’m pretty glad I know my way around that code now! Still, it’s nearly done and should be ready to go some time next week.

I’ve been winding down a bit for the Christmas weekend. Two things have kinda pushed me in that direction: firstly I’ve been picking up a few things in Steam sales, like Jamestown and The Binding of Isaac, and secondly I went to the dentist on Wednesday and got a jaw full of local anaesthetic. I ended up playing Dungeons of Dredmor for the rest of that day as a distraction, though I don’t think I can recommend Dredmor. It just feels empty, repetitive and grindy. The Binding of Isaac, on the other hand…

But more about that some other time. 🙂 I’ll do a year in review (my first year as an indie!) and some quick reviews for the stuff I’ve picked up lately over the next week or two. For now, whatever form your end-of-year holidays take, enjoy ’em.

Here is my character in Skyrim.

I AM A PRETTY PRINCESS

Really, she’s my third character. My first was a noble archer/swordswoman who’d help out anyone in trouble, leave people alone if they begged for mercy, and at least thought twice about looting burial urns for money.

One high point of her early career was manipulating a dragon into fighting a giant. The giant won and turned on her, just as a Dark Brotherhood assassin leapt from the bushes. She managed to dispatch them both. Another high point was getting drunk in a tavern and waking up on the other side of the country. But anyway – she was too upstanding to join the Thieves’ Guild or Dark Brotherhood, not magey enough to really join the Mage College, and frankly that only leaves the rebellion storyline and the main one. They’re a bit dull! Too many speeches.

So she had to die.

My second character was a thief who refused to have anything to do with violence and simply ran away at the first sign of trouble. Having avoided the nearby city on the grounds of it probably being a set-up it took him three hours of sneaking along roads, running away from wolves and robbing villages blind to reach his first city with a travel cart. He likes fancy clothes, easy money and not being shouted at by men with swords. He tried doing a quest once since it sounded pretty safe. It ended with him running through a bunch of surprised pirates hoping they wouldn’t block the doorways and then dodging their arrows as he ran for the hills. He didn’t get paid. He still hasn’t figured out where he can fence any of the stuff he’s nicked, or in fact what money is good for if you stay out of fights.

The third character, the one above, I made purely to do the Mage College storyline since it seemed interesting. Firstly, the Mage College quests are awesome. Secondly, magic is awesome. I spent something like twenty hours with my first character hitting stuff with swords, and the moment I fired up this new character focusing entirely on Destruction magic, my immediate thoughts were OH MY GOD THIS IS AWESOME I WILL SET EVERYTHING ON FIRE FOREVER.

Here are some of the bugs I’ve found in Skyrim:

END_OF_DOCUMENT_TOKEN_TO_BE_REPLACED

Man! Skyrim. It’s sitting on my desk, it unlocks shortly… it’s been taunting me all day with its un-installable-ness thanks to Steam, and I ended up reading the manual for want of anything better to do.

Here’s something I found. I love that this can make sense: 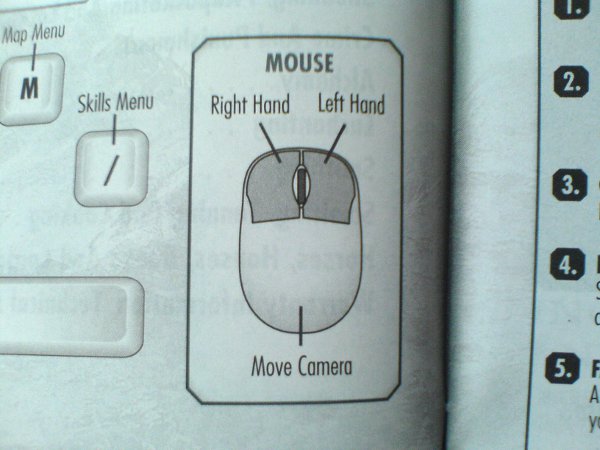 You know how sometimes you get super busy and it’s all a bit too much and you actually get less done, ’cause your brain rebels at all the doing-stuff and goes on strike?

Well hey, I get that. Last week was a bit crazy, then I finally got my car back together over the weekend. With that done I drove to the London Indies monthly pub meet on Monday evening, then I drove to Cambridge Indies weekly meetup and monthly pub meet on Tuesday, then I got back here and I slept. Now HERE I AM, mobile and sane, and getting shit done on Cardinal Quest!

Until Skyrim unlocks in 15 minutes. But I digress.

We’re working on CQ Classic still. The buglist is pretty much clean now, especially since jday’s fixed a bunch of nasty inventory bugs with an epic system rewrite, and I’ve been doing some class, monster and weapon balancing (I think Fighter is much more fun now, and Thief is a little more complicated). Watch for an update soon. 🙂

Okay, between one thing (Cardinal Quest) and another (Batman: Arkham City) and another (fixing car) I’ve literally had no time for miscellaneous things over the past week. Fortunately Batman’s finished, the car should go back together this weekend, and Cardinal Quest keeps getting better 😀 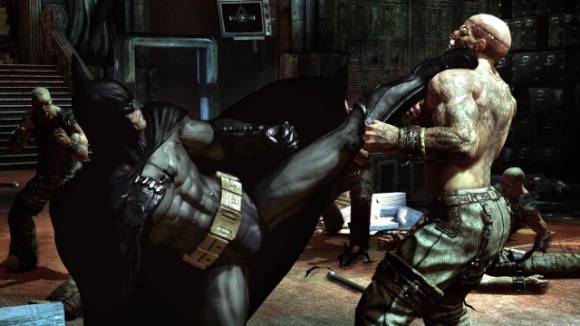 END_OF_DOCUMENT_TOKEN_TO_BE_REPLACED

I’ve pretty much taken the day off to play Forza 4:

Anyway, I’m pausing work on Fight Back for a month or so. I have a tiny bit of Vigilance related work to do – putting it out to other portals – which I’ll likely do over the weekend. Come Monday, I’ll be spending my time on a nifty contract project. It’s games related this time, indie games related even, and I’ll blog about it if I can. 😀

I’m making good progress on Fight Back’s new core engine. After the jump, here’s a little tech demo of interpolated rendering (I say little, it’s several MB because it still has most of the game assets in!):